For the month of December 2016 I decided to draw Anime and Disney characters.

The challenge was to draw either Anime or Disney characters in ‘Christmas theme’ each day, with the first drawing released on the 1 December 2016, and the last drawing being on Christmas day.

With each drawing I wanted to bring happiness and inspiration to all. On each drawing I included a quote to remind us all that we can achieve anything that we set our minds to, and to encourage us to be the best version of ourselves.

This post is basically to re-cap on the drawings I did for my December drawing challenge, and to also share the final drawing which was released on 25 December 2016. You can view all drawings on my instagram as well – @artistbybeauty

You can view these drawings in closer detail and read the meaning behind each quote in PART 1 blog post here.

You can view these drawings in closer detail and read the meaning behind each quote in PART 2 blog post here.

You can view these drawings in closer detail and read the meaning behind each quote in PART 3 blog post here.

You can view these drawings in closer detail and read the meaning behind each quote in PART 4 blog post here. 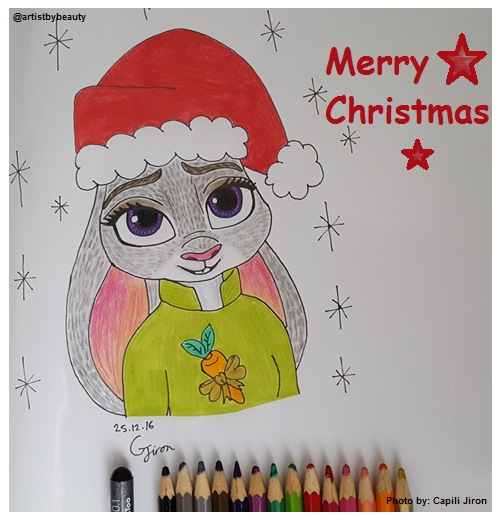 25) * 25 December 2016 * – Zootopia – I drew Judy Hopps as my final drawing for Christmas as I love how she never gave up on what she wanted to do with her life, and overcame many obstacles. Since this drawing was for Christmas day I did not include a quote, I simply wrote ‘Merry Christmas’. I really love the Disney movie Zootopia, it is very adorable, and fun to watch.

I feel very proud of these drawings. They were each so much fun to draw. I will make it a habit of doing this challenge every Christmas. In the New Year I will start posting drawing tutorials on my blog. I just need to decide how to go about releasing them, whether it should be by photo’s in steps or if I should film tutorials – I may do both. I will let you know next month 🙂 🙂

I also wanted to say thank you for your positive feedback on these drawings. It makes me so happy knowing that these drawings have inspired and made people smile. Art honestly is my life, and I cannot wait to share more with you. Especially when it comes to creating comic’s and manga.

Thank you so much for reading. If you have any suggestions on what sort of drawing tutorials you would like me to make (e.g. anime, body, animals…) let me know in the comments below, and also whether you would prefer step-by-step photo tutorials or video tutorials, or both ❤ ❤

Have a great day!

🎨 Artist ✏💕 I love to create art! View all posts by artistbybeauty

This site uses Akismet to reduce spam. Learn how your comment data is processed.

I share my opinions on art, life, beauty, anime, gaming, travel and much more.

You can also join the Artist by Beauty Club and receive blog posts by email. It’s free! Click on the Join button below.

Always stay faithful to your dreams. Have a beautiful day!

This blog has been awarded

Products that I receive may be in exchange for my personal review. Reviews are of my own opinion. My blog may contain affiliate links to products or services that I recommend or I am an advertiser for in order to earn an affiliate income. I will earn a commission if you purchase those items through my links. This is at no extra cost to you. Thank you very much for your love and support :)